Amazon threw down the holiday gauntlet on October 4th this year with dual announcements rolling out Black Friday-like deals and a new gifting tool that allows users to send gifts to friends and family with just an email.

In case you missed that – Black Friday has already begun on Amazon, and other marketplaces are scrambling to catch up.

If you haven’t launched your sales and holiday advertising, you’re missing out on a rush of early shoppers. And not only that – sales made in October and early November also come at a significant margin premium.

Early selling relies on a unified demand generation and operations strategy. You need to load up on products much earlier than you’re used to, and you’ll need to make sure that your fulfillment options can keep up with the surge.

With that operational excellence in hand, you can turn on the advertising spigot earlier to reap the rewards. On the operations side, you’ll save money by beating spikes in shipping costs and surcharges, and for advertising, you’ll save by advertising while others aren’t yet piling extra money into PPC.

In case you need more convincing, take a peek at growth in US spending on goods in 2020 and 2021 – we haven’t seen growth like this for more than 70 years.

Shoppers aren’t waiting for Black Friday to shop, and there are tons of potential throughout Q4. And as we’ll demonstrate here, early Q4 revenue will come with better margins than late November and December revenue, making it particularly lucrative.

Quantifying the Cost to eCommerce Merchants

Parcel carriers tack on substantial surcharges to holiday fulfillment, but they don’t cover the whole quarter – allowing you to optimize margin. FedEx’s will begin on November 1st, and then they double on November 28th. UPS’ surcharges kick in on October 31st and November 15th. Only USPS is ahead of the curve, with surcharges that started on October 3rd.

You can do the math yourself – what does $1.50 or $3.00 mean to your bottom line? Remember that these surcharges apply to every order fulfilled. This means that starting sales in October can improve your margin! Let’s say you discount your hero SKU by $1 in October and pull forward 1,000 sales from December. You’ll earn $2,000 more in profit thanks to discounting. And not to mention, if you can manage to restock in time, you can probably sell 1,000 more in December, too.

By selling early, you can avoid the worst of the crunch, but we know that you’re going to keep selling for the entire holiday season. You’ll need a way to mitigate the worst fulfillment challenges.

A distributed nationwide eCommerce fulfillment network answers your needs by unlocking fast and affordable shipping. It also significantly decreases operational risk during the busiest time of year because if one node gets overwhelmed, you can keep on fulfilling from a less pressured location.

Distributed fulfillment is a simple yet powerful concept that strategically places inventory across the country. No matter where the customer is, there’s always a fulfillment center that can deliver within 1-to-2 days, but at ground rates. This is how FBA offers such low fulfillment fees, but as we’ll explain below, it’s an incomplete solution at best. You’ll need Amazon FBM to power an all-in Q4 holiday season.

You can’t rely on Amazon FBA as your sole fulfillment option this Q4 – they just don’t have space for everyone’s inventory. Despite enormous CapEx spending that dwarfs that of its competitors, Amazon is still far behind where it needs to be to make FBA a complete solution for its sellers. So, as you know, they’ve implemented restriction after restriction on what inventory sellers can put in their fulfillment centers.

Even with those heavy restrictions, FBA can’t keep up with demand. In the first weeks of October, Amazon suddenly changed their Christmas receiving deadline from December 11th to December 2nd. Sellers are already facing significant receiving delays, and this is a sign that they’re going to get worse.

Your top priority must be avoiding stock outs, as they trigger a vicious cycle that will derail your holiday season.

In short, a stockout will depress your sales rank and hurt your IPI. Your storage limits will then decline, so even if it’s still before Amazon’s receiving deadline, you won’t be able to send them enough inventory. Then, with less product than you should have to satisfy demand, you might go right back out of stock.

Between massive LTL shipping delays, low inventory limits, and Amazon FBA’s own receiving delays, there’s only one reliable way to ensure you don’t have a ruinous stockout this holiday season: Amazon FBM.

Backup FBM ensures that you’ll never stop selling, especially during this critical holiday season. On top of that, it’s an important step towards multichannel growth; Amazon MCF doesn’t work with other marketplaces, and it is cost-prohibitive for website fulfillment. FBM thus powers your Amazon growth as well as unlocking new growth avenues.

Want to learn more about your options and best practices for Amazon fulfillment? Read all about alternatives to Amazon FBA in our helpful guide.

The new holiday selling season is the entirety of Q4, and if your fulfillment strategy is ready the moment the calendar hits October, you can win extra profitable revenue while your competitors lag.

Contact Cahoot today to ensure a 360-degree eCommerce fulfillment and scale up your business in no time, get in touch with us! 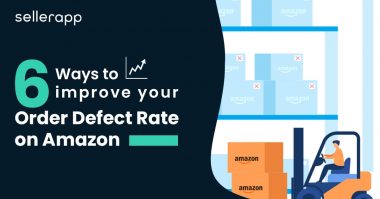